Sound to light is in fact quite simple to explain. You have a sound source, normally music, some equipment is listening to that sound source and is controlling lights. Most of the time to the beat of the sound.

Maybe the worldwide most known example is the “cheap disco light” that you can buy almost anywhere. 3 normal lightbulbs, hidden behind a coloured plastic lens, normally they looked like a set of traffic lights, each bulb responds to either bass, middle or treble. They just flicker wildly with no nice 'moves' in it. I think they are worthless, but still I had one when I was a little boy. They look something like this: 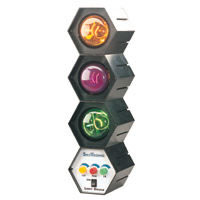 Anybody working in the lighting world should have played with these things. I see them as part of your breeding.

While these things have been around for ages now, we have entered a new world of sound to light some time ago and things have progressed considerably since then.

Most DMX light consoles, and also FreeStyler DMX, have sound to light functionality. Meaning that you can create sequences with a few steps, enable it in the cues window and let it respond to the sound. Now you don't have wild flickering ligths, you have a nice running sequence that goes to the next step everytime a beat is detected by the sound to light module. Depending on the software being used you can tune in or out certain frequencies. For example you could have it only responding to bass sounds. The number of beats to respond to can also be selected or changed in certain software which will enable you for example to respond to every beat or every 4 an so on. Not only you can control normal PAR lights, but also intelligent fixtures like moving heads and scanners.

Sound to light can work in 2 different manners:

Option 1 is far out the best working option. But not all situations allow that, so you have to do it with an external or built-in microphone.

Back to the DMX Wiki